LIARS! YOU ARE ALL LIARS AND HATERS!!

How can you all be such Haters and Liars, I don't care what you said,
The Miami Heat are the 2010-2011 NBA Champions!
I have proof. It was in the Newspapers, and we all know that everything in the Newspapers are true and there is ALWAYS "Truth in Advertising" 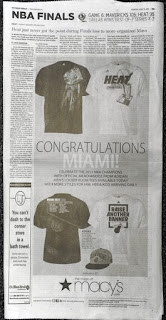 You all owe The Miami Heat and America an apology.
Posted by nutballgazette at 8:20 PM 2 comments:

The Evil Empire is Over

END OF THE EVIL EMPIRE
This was originally written on June 9th 2011, Since then the Yankees have gone 12-4, Now you know why the entire free world knows me as "The Expert"
I am writing this with full knowledge that the Yankees are just One Game out of First Place.
But as we have watch this team this year they have showed to be very weak in almost every area of the game,
Starting Pitching has shown 2 good pitchers, C C Sabathia, we know he will be good, the other is Bartolo Colon. He has been terrific but to count on him to be a great #2 is asking alot, after that The Yankee starting pitching resembles the 1962 Mets,
The bullpen has the hammer of God with Mariano Rivera, but he is 247 years old and how lomg till he gets old before our eyes?
Catching has been pretty good with Russell Martin but Francisco Cervelli has become maybe the worst catcher in franchise history. Jorge Posada is done and should be released.
Mark Texiera is good at 1st base but not playing to his contract, at 2nd Base Robinson Cano has become lazy and showing a bad attitude,
Now the Left side of the infield. 3rd base Alex Rodriguez is a shell of what he was. it is obvious that his numbers is a direct result of Steroids,
Shortstop, Derek Jeter has become Mr Choke, he is the easiest out in baseball in a big situation, If I am an opposing team and I lead the Yankees by one run and there are 1 or 2 outs I would walk the bases loaded to get to Jeter who will make the last out, (Guaranteed)
Outfield, I am among many who was fooled by Brett Gardner, we thought he could hit and was a great baserunner, his baserunning has cost the Yankees, he does not Hustle. he lacks awareness
Nick Swisher while terrific his first couple of years as a Yankee has become the player we thought we were getting, a role player, He would be a fine 4th outfielder.
Curtis Granderson has been very good, but the fact that he is the best player on the Yankees shows that this Yankee team is in serious trouble.
The other problem is the Yankees have no fighting spirit at all, in 161 games David Ortiz has never been hit by a pitch, Meanwhile Jeter and Arod has been hit 40 times, The only person on the Yankees is Joba Chamberlain.
Where are the Yankees headed? This year I think they will be lucky to win 72 games and finish above Baltimore for last place.
Long term is very grim, With the Death of George Steinbrenner the Yankees are no longer in the winning business, There is no sense of urgency to win in this organization,
It is time to fire Joe Girardi and Brian Cashman. It also may be time for a new owner who has the same passion to compete that George had, If changes are not made we could be looking at a Cub Like drought for the Yankees winning again.
Posted by nutballgazette at 3:30 PM 5 comments: